The monumental industry that is DSI Samson Group wasn’t built in one day, but it was certainly built by one man with a vision. The Late Mr. D. S. Rajapaksa JP, the great founder of the brand DSI, was driven at a young age to make a sounder livelihood for him and his family.

You are here: Home » About Us » Founder 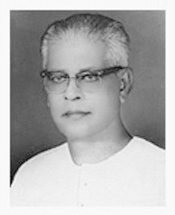 Losing his parents early in his life, Mr. D. S. Rajapaksa was raised by his grandmother who continuously found opportunities for him which led to the birth of the finest footwear company in Sri Lanka - DSI Samson Group.

Driven by a self-discipline that was very evident from the age of 14, he travelled between his hometown, Galle and Colombo working at several places until one day he opened up his own white cloth trading business in the streets of Pettah. Even after the devastating destruction of the World War II which sent him back to Galle, he came back and resurrected his business once more.

The foundation of DSI Samson Group was laid there in Pettah when he ventured into footwear and started bringing down international styles into Sri Lanka such as the famous ‘Ballerina’ slippers. He saw the potential of this trade and opened up his first factory in Galle to manufacture slippers locally. His vision of creating a loyal and friendly work environment, and creating a product that carried a reputation of quality and comfort was a huge success with praise even coming in from the Late Mrs. Sirimavo Bandaranaike at the Industrial Exhibition in 1964.

From shoes to garments, the DSI Samson Group name expanded with vigour and abundance. Even though the business grew large, Mr. D. S. Rajapaksa always remained the same humble man from Galle. Giving in abundance back to his home city by creating a plethora of jobs, his Company helped put Galle on the map. He understood the value of branding and the value of customer loyalty. Thus his products were manufactured mainly putting the customer’s needs in the forefront while the advertising was targeted at reaching their hearts and minds. His strong conviction and inherent ability to quickly identify opportunities created a strong foundation for the future of DSI Samson Group, which led to a resilient brand and a diverse group of companies that stands tall among its competition even today. As the family expanded, the children too played a part in the legacy in the 1970s maintaining the values set by their father - values such as fair treatment, equal opportunities, impeccable discipline and unparalleled levels of customer as well as employee loyalty.

Through the hard times and all the obstacles that came his way, Mr. Rajapaksa always set his success story on a background of persistence while keeping his feet firmly planted on the ground. He never disregarded his roots or the value of family, and treated his employees with a relationship similar to that of father and child. His legend and vision has endured the test of time and has touched the lives of many through significant contributions to religious events, education as well as the growth of the community. This diversity has become recognised by the many awards and achievements the Group has received such as the SLIM Brand Excellence Award, NCE Export Awards and CNCI Achiever of Industrial Excellence.

The story of young orphaned boy coming to Colombo in search of work with the blessings of his grandmother is legendary and has over the years transformed itself in to one large resolute family that is today the DSI Samson Group. The sky is the limit as far as our future is concerned and the Group can only expand into more trades and lines of business whilst driving the existing subsidiaries to grow from strength to strength.